The  Fly ball launcher a patented, manually operated and cost-effective devise used to consistently launch balls at different trajectories to train baseball and softball players through repetition with quality. It takes away the need to hit a ball and allows for more catchable and playable balls to keep practices and players involved.
The Fly Ball Launcher is designed to be used for both outfield and infield training. It has the ability to throw fly balls, line drives, and ground balls accurately, which allows players to get quality repetitions. It does not need generators, cords, gas, batteries or outlets. It has the ability to be used at distances up to 400 ft. for training of older players. It also launches softballs up to 275ft, and launches vertically for practicing infield pop-ups.

How to use it : The operator can stand or crouch behind the equipment, then place a ball in the pouch and let go. Based on the amount of force when pulled back and the angle of release, the operator can control distance as well as angle of the ball launched!

We can also provide the bands with attachment clips if you do not have a fence but wish to make your own stand. See attached from one our customers in Florida. His bands with clips and pouch sell at 20.00. Contact us to purchase. 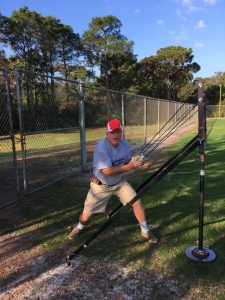 Fernando Almaguer II is passionate about baseball. He has over 30 years experience, coaching and mentoring ballplayers. He had two boys who both reached the collegiate D1 level and played some years after graduating. His daughter played highschool softball for Pearland Highschool in Texas. As an engineer he had some great intuitive ideas for baseball/softball training aids. One was the t-ball stand with rotating balls on both ends for continuous swing practicing. After not capitalizing on this invention, some years later he saw the tool being marketed and bought nation wide. Learning a lesson from this experience he has invented Flyball Launcher, taken the time to patent the idea and market Fly Ball launcher in hopes to help other ballplayers, young and old, male or female. So, here’s to coaches and players worldwide doing there due diligence to reach their dreams in the sport. If you would like our help with catching flyballs and feel it can add value to your practices, you can purchase our product and reap the benefits of fast and efficient Fly Ball practice!